In 1997 Nokia released their 6110 phones and included a built-in version of the basic arcade game “Snake,” considered to be the very first mobile app. In the 23 years since then, mobile apps have risen to become one of the most popular ways for consumers to connect with brands.

Consumers are spending more time than ever before on their phones, with 90% of that time being used to interact with mobile apps. While the adoption of mobile apps has been steadily growing, the recent health crisis has driven a sharp increase. Individuals who may have been reluctant to use mobile apps prior to the pandemic are now seeing them as a safe, affordable, and reliable way to stay connected, entertained, and informed as well as to manage their finances and shop.

Mobile App Activies in US 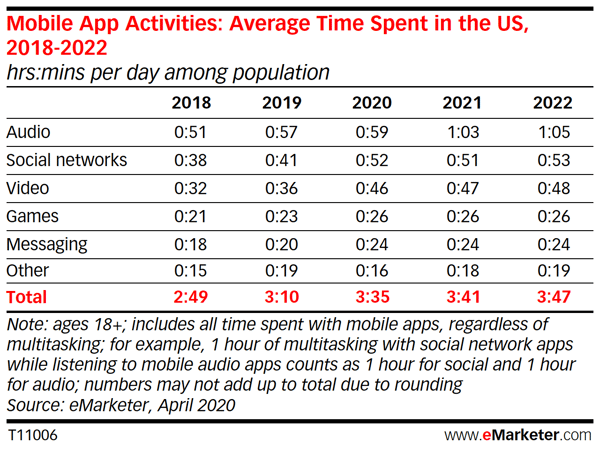 From April 2019 to April 2020, mobile web traffic increased by 11.4%. US adults spent on average more than 4 hours a day on the mobile internet, with 88% of that time spent engaging with apps.  In the first quarter of 2020, consumers spent over $23.4 billion via app stores, the highest quarter ever reported.

Time spent on mobile videos and gaming has also increased as we seek out ways to entertain ourselves, as have apps that deliver news, health, and education. Other categories that saw substantial growth during this period of time include grocery delivery and business service apps.

Many of these changes, while accelerated by the pandemic, show strong signs they will continue. Forty percent of internet users aged 16 to 64 said they would shop more online and 30% of those respondents stated they would specifically use online grocery services.

Financial transactions via apps have also risen. Pre-pandemic, just 49% of global consumers had used internet banking. That number has now risen to 57%. In addition, April saw a 200% increase in new mobile banking registrations, while mobile banking traffic rose by 85%.

With this level of growth and consumers’ continued shift to digital consumption, it’s no surprise bad actors are looking to profit. It’s more important than ever for brands to ensure that the experiences their consumers are having in mobile apps and mobile app stores are authentic and safe.

From brands that have long had a mobile presence to those accelerating their digital transformation efforts, having a comprehensive brand protection strategy in place that addresses mobile apps and app stores should be a priority for any brand protection team. For more information on how to plan an effective enforcement program, we’ve published an informative guide that you can download here.

Brand Abuse is Systemic: The Role of Networks in Brand Abuse

The High Cost Of Privacy In A Post-GDPR World

The Future of Physical Retail and the Integration of Mobile Apps

Protecting your Brand in the new world of NFTs

Mobile Apps and Malware: Shielding Your Brand from Cyber Threats

Hiding Behind Brand Names: Work From Home Scams on the Rise

Blockchain Domain Names - What You Need to Know